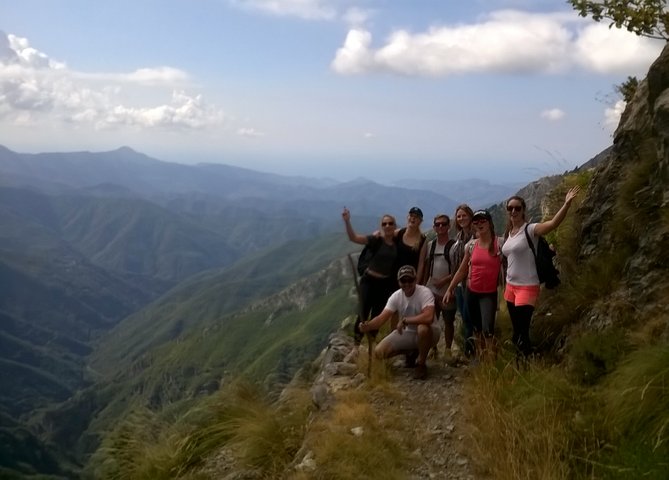 "We very much enjoyed the ten days we spent with you guiding us in Liguria. We appreciated your flexibility in tailoring the days to our needs, and enjoyed your personal excitement about Liguria — its culture, food, nature, and general ambience. And finally, it was a gas staying in the well-appointed small apartment in your house, and your impeccable British-English made it easy. All in all, we loved it."

"Thank you so much for helping us to have a lovely holiday and enjoy our time in Liguria more than we ever could have on our own.
We will be sure to tell all our friends and encourage them to use your wonderful and friendly business!

Thank you.!
Ps: Already planning our next trip back!!"

"Dear Lorenzo, having returned home from a week spent exploring Liguria we would like to offer you our thanks for a most enjoyable holiday. Before we arrived, Liguria was a blank canvas to us and we had booked the visit on the recommendation of friends who had discovered the region, and you, a few years ago.
From the moment we met you we felt that we were in capable hands. Exploring a country when one does not have a good control of the language and when geographical knowledge is nil can be daunting, so your local knowledge and ability to speak English and Italian fluently was an important factor in creating a relaxing break for us.
Your expertise meant that the walks we undertook with you were pitched correctly at our ability and fitness levels and provided variety and interest tailored to our needs.
Good food is something we enjoy and you introduced us to local delicacies that we would otherwise have missed – the Tarta Verde was a delight! We dined in restaurants that were hidden gems – off the beaten track, yet lovingly run by families who took pride in using local, fresh ingredients.
Our memories of Liguria will stay with us and we have already recommended you and the countryside of your home region to our friends who enjoy walking, exploring and making new discoveries. As there is so much still to see and so many beautiful routes to be walked we plan to return and will book your guiding services again. ‘Molte grazie – a presto’."

"What a wonderful week! The walks were challenging and exhilirating. The scenery beautiful and the food superb.

Lorenzo is the perfect guide. His passion for and knowledge of the countryside ensured that every day was packed full of interest.

We love Italy and the people. This was our seventh visit. We strongly recommend Imperia and the Riviera dei Fouri to you. You will not be disappointed."

"I had the distinct pleasure of spending a couple of weeks this past summer with Lorenzo climbing Monviso and Toraggio West, canyoning, touring Liguria and eating/drinking the absolute best that the region has to offer.  Liguria just has so much to offer: crystal blue seas, the maritime Alps, fine local produce that results in regions divine cuisine, off the beaten international tourist path, rich in history and culture, excellent hiking, climbing and biking, not to mention the home of Lorenzo Gariano.

A little about Lorenzo – First, his English is impeccable (it would only be better if is accent were American rather than English).  Second, while he is a bit of a local hero as the only local man to have completed the Seven Summits (highest summit on each continent, including Everest), he is remarkably modest about this near superhuman achievements.  Third, Lorenzo is very astute and has a keen eye for finding the right trails for a groups ability, the right restaurant or right activity and at just the right time.

Liguria is a destination for the discerning traveler.  Lorenzo is the guy to show you the best it has to offer"

"Just a short note to thank you for everything you did for the four of us last week and to let you know just how much we enjoyed the experience. The guided walks were excellent and routes very well thought out and in particular the Alpine Trail was something special with it's varied and constantly changing surroundings and a walk I regard as the best I have done in Europe. In addition to the walking the food was also excellent and I now know why Italian food has the reputation it strongly deserves; the village of Poggi and it's surrounding villages offer the most spectacular views and a lot of interest e.g. village of the painted doors and village of the witches which we especially enjoyed. I will strongly recommend the area and guided walks to all friends and colleagues.

Thank you for everything and will be seeing you again soon."